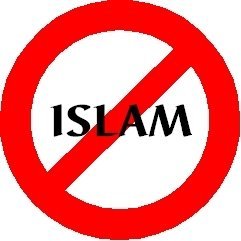 A global war on Islam is needed. It need not require military style weapons. Protecting borders and curbing immigration into free nations, improved and strict vetting, is one action possible. Improved education of moderate Muslims, all Muslims, on the true history of Islam, its history of making killing fields of Christian territories in the earliest years of the Caliphates, the Umayyad and Abbasid Dynasties. Use drones to drop literature in Arabic, Farsi, Urdu, Bengali, Turkish, and other local languages, to include English, telling of other religions and Islam’s history of horrors, violence and imperialism.  Use cyber-techinical skills and broadcasting to reach Muslim majorities and override autocratic censorship. Develop operatives and informants in every corner where Islam is present and Islamist organizations are propagandizing lies and disinformation. Country embeds, sources from mosques and madrassas, and eyes on the organizers, such as the OIC, CAIR, Muslim Brotherhood, Muslim Student Associations, ISNA, et al are needed.

Yes, I am suggesting profiling. Bush should have been more strident in his regard for the dangerous, seditious, nature of Islam wherever there are Muslims. Moderate Muslims may not be jihadists, today, but they are ripe prospects for efforts to radicalize. They are targets, fodder, for Islamic organizations using financial resources from donations by fundamentalists and oil rich Islamic Nations (Saudi Arabia, Iran, Iraq, etc.) to promote, encourage, cajole and entice moderates closer to the true Islam outlined by the tenets of Islam.

Islam is a diabolical charade to conquer the world for Allah. In truth as history proves Islamic conquests blaspheme God, as victory for Allah, but in reality it is victory for the monarchs, the Ayatollahs, the Caliphs, the Autocrats, the Husseins, the Mohammads, the Assads, the Ghadafi’s, the Republican Guards (Iraq), the Islamic Revolutionary Guards (Iran), the Quds Force, the Taliban, ISIS, Al-Qaeda and so forth; the elitists, and the cronies are the beneficiaries of Islam. They pillage and plunder for treasure, to include slaves, sex-slaves, for their pleasure and enjoyment. Those beneath them are to be militant believers in their leaders, and Allah (and the Messenger), ready to defend them and aggressively pursue outreach to gain even more. The Muslims are but pawns for the rooks, bishops, knights, and kings of the chessboard of Islam. The Queen is but the king’s chattel (along with harems and eunuchs).