In a prior article, “War – God vs the Devil,” the focus was evil that is inherent in all humans. From an individual perspective our battle is with self, choosing Christ as our substitute, the grace of God paying the price for our sinful nature and the crimes committed against God as a result.  The evil in us can be treated with faith in Christ.

What about the world as a whole? Is the war between what is good, at least better, and evil being played out daily between ideological factions? If there is a holy war just how can it be fought? Or is it being fought? The sides, as this observer sees it, is between freedom and Islam.

Why Islam? Well, the answer, my answer, is because it is just the opposite of freedom. It does not permit freedom for any of its adherents. Those that consider themselves free are ignorant of the facts, or, apathetic towards the tenets of Islam. They, if Muslim, would be hypocrites subject to the same punishment as apostasy laws (death)! They either forget or disregard Apostasy Laws, the mechanism of total control of the Muslim. It is as if the devil has taken possession of an ideological flock and constrained it for his own purposes. One other facet, ‘hatred,’ is taught, instilled, used to blacken the hearts of all adherents to in turn condemn and threaten non-believers, causing them to fear the Islamist and either convert or resist. As resistant entities they are considered aggressors against Islam and to defend the ideology the army for Islam can attack with the blessing of their manmade god, Allah.

The opposition is Freedom. The freedom contingent is not a perfect group of God lovers.  They are pluralistic, secular, Christian, Jew, other religions, atheists, and more, but they are not intent on destroying others, and they are not Muslim. They generally want to be tolerant of those who may not wholly agree with them, religiously or ideologically. Recent demonstrations against America’s elected President represents a distortion to the claim, but it usually applies. It is a pluralistic bunch with a common law mentality. Common law protects everyone providing safety and security in the homes and for their homelands. God is not the framer of the common laws, however God does influence them in terms of human rights issues, equality of all persons, and the ability to choose. The secularist may resist acknowledging God’s influence on their moral and ethical values.  They may be good persons, yet when asked where does your caring, giving, and accepting posture come from, they are want to answer, “God,”  prefer others (such as teachers) avoid religious justifications, and more likely their answer is “everyone already knows, it is common to us all.” God, as in Eden, prefers the choice be God, loving God as God loves everyone, but enables the human, even when warned of the consequences, to make decisions that disobey God, but not society.  Society frames common law.

Battling ISIS, Al Qaeda, Boko Haram, Al Shabbat, and similar radical Islamist (true to Islam) groups as a whole is as fighting a borderless entity, an ideological combine without defined edges.  When most world leaders think about war it involves one sovereign faction against another. Without a Nation to identify there can be no war in the traditional sense.  The organizations named, let’s refer to them as Islamaland, have no defined homeland, only an imperialistic quest to take the world as a whole for Allah.  The leader would be a king, their Caliph, a religious leader as a manmade God, doing Allah’s bidding, as well as governing.

There has been a declaration of war between Muslims and the United States in the past. When Thomas Jefferson was President (1800’s), the Berbers, an Islamic sect, declared war. They occupied areas along the coast of North Africa, today defined generally as the Maghreb. They had the habit of taking ships and their crews for ransom. It was how they made money. Work and productivity was not in the forefront of their thinking or culture, but raiding and taking the spoils from their victories was. They would seek money from America to then release the ships, their cargo and crew, to go on about their business in the Mediterranean. This was costing this new independent country a large portion of their annual budget. Jefferson said ‘no more!’ America’s Navy and Marines entered the Berber war and at the time succeeded in defeating the enemy. But they did not stop, just were more careful about whose ships and crew they pirated for ransom. The declaration of war, was taken off the table, reluctantly, by the Berber Pasha.  But in their actions the Muslims continue to apply similar tactics against those they consider the infidel, the aggressors, who resist the actions they take to advance Islam, add to their treasuries and their territories. They do as Allah Wills and resistance is against that Will.

Tripoli was a battle-sight, the Marine theme song references this incursion, and a monument stands at Annapolis in honor of America’s first military victory.

The Enemy Has No Boundary

Islamists, the scholars and educators, feel the entire universe is Allah’s for the taking.  Their actions are brutal as the methods employed to achieve their goal is ‘whatever is required.’  Terror is a means by which those with little appetite to do battle will simply lay down their arms, asking for peace, and allow the Islamic forces to advance.  Islam has grown as a way of life more by force than by acceptance; its culture grew from the loins of Muhammad, his followers, those conquered and converted and their offspring.  Born into Islam, even as the first generation after parents converted (to avoid death or adverse taxation), was to be a cultural clone subject to the laws that prevented departure from the Muhammadian ideological ethics and moral values,.  The descendants were to accept and embrace attitudes and feelings towards non-Muslims (hatred) as inferiors, infidels, slaves and pigs.  Muhammad’s culture was as a caged lifestyle with membership in the army of Allah called for as jihad for all Muslims (Sura 9).  For those bound by Islam, Muhammad’s pogroms each year, decade and century, had larger numbers of enforcers.  Terror was the means to achieve victory.

Islam Has No Border

Having no border Islam can creep under the entry to your country, if not Islamic, as overflow from a septic tank, bringing filth, unexpected problems, and a mess that can be hard to properly eliminate.  Ignorance of Islam and the desire by liberals to be everything to all people, even as closet elitists, leads them to embrace Islam as a champion of religious freedom.  They know not what they are doing or allowing into their culture.  They are ‘self’ motivated, feel all people are basically good (even though it is difficult for them to recognize the biblical God as the source of proper ethical and moral values, and the good to which they defer).  Islam is as the black death invading a heathy room.  Look at the source of those who arrive as immigrants, from areas without productive cultures, war torn, dependent on other countries for aide, mostly illiterate, living under the thumb of autocrats using Islamic police as enforcers, male dominated and without the social norms, to include human rights and equality of persons western cultures abide by, thrive upon and live by.

Islam is the evil of our time as its culture has been defined by the example Muhammad.  He was smart enough to answer questions raised as to the direction of his ideology, the moral code, ethical practices, honor among families and peers, hatred towards infidels, the methods of punishment of members, including death, beheading and dismemberment, by pointing to the heavens, towards the supernatural, the incomprehensible, his god, Allah.  The people needed an answer outside themselves, and Muhammad was aware enough, to provide Allah.

Evil is inherent in all humans, but Muhammad has exploited that evil to create a force, first for himself, and in turn for Allah, as the supernatural master that dictated indirectly the Scripture of Muhammad the Messenger formulating a voice for his god. Allah and the God of the Bible are not the same.  Reference to a force outside ourselves may be the same, but the avenue to be strolled to lead on to the afterlife is totally different.  For the Muslim it is a deception, an aberration, a smoke-screen of platitudes and lies that leads not to the Paradise offered. They will join Muhammad in Hell. It is more as the politician offers his constituents until the choice is made, the vote is cast, and then reality sets in.  The green grass is really a scorched earth.  Islam brings armageddon to one place or another on this earth daily.

In war the only outcome is sadness, destruction, loss of loved ones, and darkness.  Peace 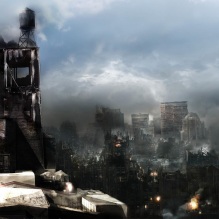 brings light into a dark world.   Why is peace so difficult for so many world leaders?  Give peace a chance and see economic explosions instead of nuclear ones. In peace prosperity will follow, while in war there is naught but poverty, a landscape stripped of its beauty.  All mankind is better served in peace, while only the autocratic, living in fear for their lives, think they are in control.  God is in control.  God provides love, while man provides hated.  Ask why?  If man can overcome his sin nature all wells will be filled with living water.

Beware of the Borderless Imperialists