After the terrorist stabbing attack in London in March (2017), a radicalized Islamist involved, the PM made the statement that the attack was a “perversion of a great faith.”  I hear her words but may interpret them a little differently.  The attack itself was perverted.  Why anyone wants to kill for the sake of killing, whether using a knife or another weapon, in beyond any logical thinking.  Yet the perpetrator, I’ll just refer to by initials, KM, was a Muslim.

In our recent history when such acts of violence are committed what ideological association do the vast majority of such criminals belong?  That being the case I first take umbrage with her use of the adjective ‘great’ in reference to Islam.  It is not great, large in numbers possibly, but there is nothing great about an ideology that induces so many to wantonly murder others.  There is nothing great about a religion whose written tenets call for hatred of Christians and Jews, and other non-believers, infidels, until the entire world is occupied, praying 5 times a day, living in suppression under the watchful eyes of Islamic police, and allows humans to act as gods in formulating laws, enacting the laws and carrying out punishment for laws which are Allah’s alone.  Man is not and never will be God, not even a Muslim man.

The mayhem we are observing worldwide by Islamists is evil, is diabolical, and is called for in what they refer to as their ‘holy book.’  What can possibly be holy about a scripture and associated documents that call for killing those who do not agree wth them.  How anyone can conceive that Islam is great in any fashion in beyond the pale.  Nothing that oppresses women or treats them less equal that their male counterpart is anything other than a program that favors male dominance and cultures that facilitate the enrichment of the elite.

If you love freedom, if you love liberty, how can you embrace Islam as a religion and give it equal billing to religions that have no desire or inherent intent, by Scripture or the command of its scholars and leadership, towards imperialism, to conquer new territories, change existing constitutions (for religious laws), and kill anyone that gets in their path.  ‘Kill’ sounds strong, but it is accurate.  Fighting, war, killing non-Muslims, is the holy battle, the jihad, of Islam and the stage for their battles is the world. Conquests occur one nation at a time, by direct invasion or surreptitious occupation. 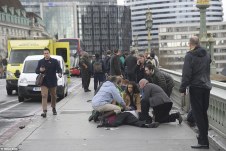 From stabbings on the Westminster Bridge, to July 7 Bus attacks in London, to 911 WTC devastation in New York City, to Pan Am Flight 103 over Lockerbie, bombing of Marine barracks in Beirut, truck bombings of US Embassies (Kenya and Tanzania), the Bali night club bombing, several devastating explosions in Istanbul (synagogues and consulates), the Beslan school hostage crisis, Karachi motorcade attacks, a series of Mumbai killings, not to forget Boko Haram in Nigeria, Peshawar school massacre, and multiple egregious ISIS atrocities, there have been thousands of other attacks in the name of religion and Allah.  In what manner are these murderers, Islamic terrorists, so easily manipulated to create havoc and cause destruction to multiples of innocent people throughout the world, as if doing these horrendous acts in the name of Allah makes Islam great or saves the perpetrators to live in eternal peace?  If they do not represent Islam as so many of the liberal, the political softies, claim, then they will never get to Allah’s Paradise.  But is that not why they do what they do; their Quran tells them they will go to the front of the line.  How it even makes moderate Muslims want to remain as Muslims is a question?  But then the powers in charge (not the power from above) do kill Muslims if they leave Islam, under manmade apostasy laws.  Oh how the flock is caged!  Are the moderate Muslims in fact not that moderate, just quiet, preferring to let others kill for their ideology, while sitting back afraid of their peers, or just lacking the courage to be more forceful, more like the jihadist that stabs and dies for Allah.

The protective cloak of a religion has become the most effective and deceptive means by which Muhammad chose, brilliantly in many respects, to advance a takeover of his homeland.  Muhammad proclaimed, “I have been made victorious with terror.” Subsequently the followers, of and by his example, of Islam have expanded the envelope, dissolved borders, to make the whole world their oyster.  The ruse as a religion has worked and is working. Terrorism is the method employed to make gains for Muhammad and Allah wherever possible.  The liberals in many free countries, European Union countries, the United Kingdom and America, have taken to Islam without forethought, defending this grotesque ideology as if they enjoy a unique and more open view of the religion and their role in the world. They know not what they do, unfortunately, and have allowed the gates of their free nations to be opened to advances by this calamitous legion of hate mongering imperialists. They embrace terms such as ‘multiculturalism’ and ‘globalism’ while eating from the trough of the dollars they receive to support their personal causes, campaigns for reelection, and improve their stature among the elite peers with whom they compete for power and prestige.

Western politicians step up anew it seems each time there is another Islamist terroristic attack to protect Islam from criticism.  The Westminster Bridge attack was indeed Islamic, not a ‘perversion.’  Teresa May calling the recent attack a perversion of Islam is wrong.  It is and was Islamic.  Future such inspired attacks with the Quran as the tool of radicalization is a perversion of the term ‘religion,’ unless ‘religion’ includes any form of collective following or group, which would include atheism, communism, fascism, wiccanism, voodooism, and respected faith based groups such as Christian and Jew. Then ‘religion’ is but a stew of joiners, good, bad, indifferent and terroristic.  What must be culled from the stew is the invading species, the meat, or vegetable, that spoils the result of what could be a pleasant blend.  “Islam” is the ideological roach that crawls into spaces where they are not wanted at all.  They are to be attacked with the most powerful and lethal form of roach killer available today.  But the liberal political fools will not soil their fingers with the necessary spray that will do the job right.