From a commentary written by Sauer Mahdi Yaramahdian, Master of Islam.  Read carefully.  “The foundation of nationalism is based upon giving authenticity or sanction to the existence of national and racial groups and categories. Nationalism is based upon a set of national boundaries in addition to various factors such as race, language, history, as well as others in the human society. It divides these factors into individual and independent units and encourages the individuals who are situated in those given boundaries to consider the people outside of those boundaries as being foreign. In some cases it even promotes animosity and friction towards all those who are considered as ‘others’. Therefore, the focus of nationalism isn’t the whole of the human race, but individual and national units within that whole, and its final goal isn’t the strengthening of the human society as a whole, rather, its focus lays entirely on the national level.

Contrary to this position, Islam, through its ideal logic, focuses on the whole of mankind, and considers mankind as being one unit. What Islam recommends is not only focused towards one nation, race, or geographical location; on the contrary, Islam focuses its recommendations on mankind as one unit and as one whole. Those who have accepted this system (religion) are considered equals and brothers, and they benefit from equal rights and responsibilities in regards to worship, politics, economics, and social life. The end goal of Islam is the strengthening of the ‘Society of the Oneness of God (Tawheed)’; this is a society that lays aside all boundaries and limitations regarding to geographical borders, race, language, and culture, and with all these individual factors creates a multi faceted quilt.”

Consider as examples nations such as the United States, Canada, Great Britain, and others,  European. They have defined borders. They have identifiable cultures. Their language is distinct, they have their own recorded history, a flag, and separate rules of law (Constitutions).

Islam is a religion. As such it seeks a world that follows the same code of ethics. Christianity is faith based and seeks a world in which most accept Christ as their savior. There is a code of ethics to be pursued that would make the world peaceful.  Both are without borders. The distinction between the two rests with governance (control).

Islam is an ideology, a complete way of life for the whole of a community of humans, with overseers of the rule of law of Islam, Sharia Law, perpetrated by Muhammad, the example and first overseer. A supernatural power, Allah, is the compelling influence, never seen, who shared his words through an intermediary, Gabriel, with Muhammad. Upon the death of the mortal Muhammad a world leader for the umma (the community), a King, or Caliph, became the ultimate overseer. The overseer guided everyone to act as Allah willed and they enforced.  It is a Theocracy where government oversight and worship of Allah are inseparable. Law is both civil and religious.  It is enforced and punished similarly.  Death is the punishment for those who once a Muslim leave for another way of living and believing. Death for apostasy places a primary hold on all Muslims limiting their freedoms and ability to think independently.

Activities of daily living for a Muslim are to focus on Allah, totally obedient to requirements for prayer, to food habits, the pillars of Islam, and more.  Striving to expand Islam throughout the world, actions that are imperialistic, are to dominate. Devotion to Allah is to be a greater commitment than work or serving society. Every action of every day in obedience to the tenets of Islam are to be weighed as good or evil and accounted for as a credit towards salvation, a life eternal in Paradise as defined in the Quran.  Allah never presented himself to mankind and a relationship with Allah is not possible.  Knowing Allah will always remain an imponderable.

Whereas Christianity is a faith based religion, the choice of those who follow. Governments are not compelled to enforce God’s laws.  Judgment and punishment is God’s alone.  Laws common to all people to insure their safely, their independence, their freedoms and their human rights are those made by man.  To the extent man’s laws are positively impacted by the ethical and moral values of Scripture (the Bible), a world more acceptable and peaceful can ensue. Nations can have their borders, but those who follow the way of Christ, God’s example for mankind, do so without boundaries, except those respecting their elected or appointed government officials.  Christianity has no apostasy law calling for death to those who leave the faith.  No government acts as an enforcer over the Biblical laws. The values of this religion, as Judeo-Christian moral and ethical values, are to be considered in the structure of common laws, insuring equality of sexes and races and human rights, regardless of religious beliefs (those that believe in God or do not believe in God). Biblical laws are not the rule of law anywhere. Certain aspects of Biblical Law are incorporated in many national Constitutions, those especially that embrace freedom, liberty, equality of human rights for everyone, and even doctrines that encourage capitalism.

Christianity is individualistic. It is not a community or national requirement. Salvation is assured to those who have faith in Christ. The saving Grace of God providing for the redemption and restoration of mankind gives hope and joy to those wanting and having a relationship with God.  It is faith based alone. Recognizing you are a sinner is a step a Christian first takes. Humans are spiritually dead, eternally dead and die physically because of sin. The story of life begins at creation, is impacted by a fall from grace, followed by an opportunity to redeem oneself, and redeemed to be restored to the original package. Salvation is thus assured.

Islam is not a religion of faith; it is an ideology of control.  Hearts are not left to decide.  The choice is not yours as a Muslim.  And if death for apostasy was not imposed, there probably would be no Islam.  A borderless religion makes great sense, but not an imperialistic grand international government order masked as a religion. Man is not to control what you believe.  Man is to regulate the order of things as rightly inspired by God.  We are purposed by God to do good.  But not forced by man to do the good that God ordains.

The border, no-border argument, framed as globalism, is erroneous.  Nations can form and structure constitutions that provide free, safe, and secure environments with armies, as needed, to protect residents.  They are not there to do God’s will.  Speaking a separate language, having foods and traditions with historical foundations, and a history unique to a nation provides comparisons and examples of progress, right actions and wrong actions, and leads to further improvements that can be learned inside the borders and by those outside the borders.

I thus disagree with the negative connotation from the opening quote saying, “Therefore, the focus of nationalism isn’t the whole of the human race, but individual and national units within that whole, and its final goal isn’t the strengthening of the human society as a whole, rather, its focus lays entirely on the national level.”

Observing what happens within different borders provides lessons to be learned or unlearned within the borders of others.  States in the United States are as micro-bordered environs with the best for all embraced from a Federal viewpoint (the whole), at the same time allowing strong identities to remain.  An Okie or a Texan, a New Yorker or a Los Angelean, have much to offer each other while enjoying personal preferences that are not harmful with which they identify.  There is also the individual that delights more in a Federal view, possibly considered broadminded and more objective. It all works, as sameness would be boring.

Internationalism is the same as no-borders.  Multiculturalism, a desire to respect and cater to individual cultures, is a desire filled with erroneous elements.  Heritage is wonderful.  When people move or relocate reminders of their past environments can provide memories, positive and negative.  People generally relocate for a better life, improved living conditions, job opportunities, better education, and equal protection under the laws of their new hosts. They may remember clothes and colors, foods and odors, sounds and dances (if they were allowed to listen to music or dance).  Who wants to be reminded of an oppressive past, except to be aware that no one deserves to be raised or live under inhumane conditions.

Assimilation becomes a norm, unless the inherent expectation of a lack of freedom, never expected in their new homes, from a brain conditioned to resist that which is new and free as a temptation, is accompanied by influences from their past as reminders.

Relocating Muslims from Muslim majority nations where mosque and state are one are as aliens in a new world. Coming from environments without exposure to Judeo-Christian values, with no experience living in free environments, and with little knowledge of how to act is free civilized societies these foreigners are often encouraged not to change, to become a force to grow their Islamic faith, respecting the Will of Allah to expand Islam as a striving to attain paradise. They are called upon by peers, Imams, Mullahs and Islamic support organizations to continue to devote their daily lives to praying, reciting the Quran, proselytizing Islam, and showing their contempt for the sins of the free world as well as infidels.  Allowing such an ideology to stain the cultures they invade, live as separatists, promoting laws contrary to that of their host country, is multiculturalism gone wrong.  It makes clear how erroneous this concept is and that those politicians who support it are causing harm to the freedoms of others while appeasing, under the aegis of freedom of religion, a force intended to alter societies so the evil inherent in the interpretation of Allah’s intent, as expressed by Muhammad in years past, can be imposed.

The quote says, “this is a society (the community of Islam) that lays aside all boundaries and limitations regarding to geographical borders, race, language, and culture, and with all these individual factors creates a multi faceted quilt.”  If you understand Islam there is no ‘multi-faceted’ quilt.  There is one designer, one seamstress, one color, one order, a lack of diversity, a lack of independence and a total lack of creativity and freedom of thought.  Borderless Islam is brainless living.  Allowed to invade productive societies devout Islamists will harm the economies with their dependent nature and lower productivity standards as well. 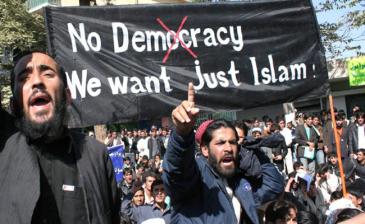 Lastly, consider this, “Those who have accepted this system (religion) (Islam) are considered equals and brothers, and they benefit from equal rights and responsibilities in regards to worship, politics, economics, and social life. The end goal of Islam is the strengthening of the ‘Society of the Oneness of God”  The ‘equals and brothers’ are only Muslims, all others are neither equal nor brothers/sisters. The ‘equal rights’ referenced are those acceptable only to the regulators (man) of Allah’s Will. A woman does not have equal rights to men.  That is a known fact.  In free societies women are equal.  The ‘end goal of Islam’ is Sharia Law.

Islam is to be an international, global, legal system attained through imperialist means to have all people identify only with Muhammad.  Through multiculturalism politicians are allowing pockets of Islamists gathered in localities within host nations.  As a cancer, it will spread, localities will grow, metastasize, become larger, become townships, cities, states, nations and with borders destroyed international All for Allah parts of the Caliphate.
Go borderless with Christ.  Stick with your borders otherwise.