Taking from the stance of Turkey’s President Erdogan, There is no such thing as moderate Islam; Islam is Islam.

As everyone of those mentioned looks to the same source for their guidance they are very much the same.  It is the Quran, the Hadith’s and Sunnah, the sayings of Muhammad, and the example of Muhammad which is the foundation for this ideology.  Allah is the guide. The law of Islam grew from these texts as well as the dictates of early Caliphs of the religion, the imperialists for the mantra of Muhammad.  The primary schools of Islam, several of the Sunni persuasion and I believe just two of the Shiite persuasion, utilize the same source material, only differing in interpretation.  The basic elements however are the same.  Just as Christ is the savior for Christ followers, be they Catholic, Orthodox, Protestant, and its many denominations, it is the life, punishment for our sins, death and resurrection of the Lord that is the same.  For Islam Muhammad and Allah are the same, and the Quran is not to be questioned.

What they believe, some basics.

All Muslims are cut by the same cloth, regardless of what any one thinks or says.  If they stray from the basics they are apostates.  They might as well leave the ideology for another religion.  Theirs is the only religion that is a total life-style without compromise.  The Religion, the ideology, the governance, the Law is by the Book, the Quran, Hadith’s, the Pillars, sayings of Muhammad and the example set by Muhammad.  He beheaded, he hated, he killed and he punished with extreme chastisement indiscriminately in the name of Allah to advance his cause.  He carried a sword and used it.  In contrast Christ never carried or used a sword. Islam is a theocracy and only operates as such.  Thus the police of those governing Muslims are the Islamic police, judging for society and Allah at the same time.  It is an oppressive and vindictive ideology with punishment carried out in the  manner of ancient times using ancient implements. Human rights are limited, at best, education restricted to those selected, not women if possible, and learning the methods of war and terrorist tactics include in most curriculums.  If not part of the preaching in the mosques and madrases where Muslims are in a minority, it will be as their numbers and concentrations increase.

There are Muslims that are likable.  They can be friends, although they are not to be friends of infidels.  As neighbors they are to be kind and a proper representative citizen.  Loving their neighbor is not called for.  If not part of the big picture today, then in the future they will either be or called heretic or apostate for altering their views.  Modernity is not in the picture for the future of Islam.  How can it be when the tools they use for the palette of the days ahead are always the same. They paint with one brush and one tube of oil paint.  The artist using a new hue or brush stroke is subject to their hand or arm being separated permanently from their body. Until they can wholly agree on a new ‘true’ Islam it is what it now is.  Even the IS terrorists claim reference to Islam as the ‘Religion of Peace’ is a falsehood.

Therefore defining Islam in whatever fashion you prefer results in but one Islam.  All definitions fall into a funnel to produce the same liquor.  It is not a blend.  It is the same drink with the same methods of manufacture and the same taste.  Drink up or die!  Or find a new path.  Independently choose, volunteer for the religion to follow (or not). 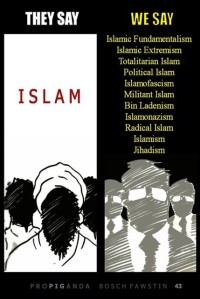 One thought on “Defining Islam”