Speaking to a Muslim. What were you before Muhammad? How did you come to be a Muslim? Was it by choice or by coercion? Was it to live or to die for your belief? What did your ancestors believe?

No matter how much the scholars of Islam try there was no Allah before Muhammad. There was God and to the extent Allah is the name of God, linguistically, then Allah is the Biblical God. The Qur’anic Allah is not God, as God is not a deceiver but a truth teller. God is not one to fight those who do not believe, but to love them and pray constantly they come to understand the good news, the saving grace of Christ. God is not a proponent of hate.

Culture is important to us all. Christians, Jews, Hindus, Buddhists, and Muslims, among many others, look to their families and what they believe; embracing the faith-structure they inherited. But when research is conducted into one’s ancestry it often reveals some most interesting facts. How did one come to be and to believe what they do today?

The dipiction of a family tree tends to focus on the top of the tree, indeed the branches.  But what is most important is the roots. For the Muslim the roots are varied, all stemming from a history and seeds that were not Islam. 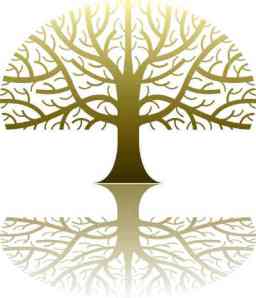 What today is Saudi Arabia is an area that prior to Muhammad was uncivilized for centuries. Bedouins lived and roamed. Tribes, if there was any form of government or authority, existed with chiefs whose character became the guide. Relying on the morality of the chief found many bands of brothers, as women had no status, doing battle with another. War kept them from being bored in a life without meaning, direction or purpose. Honor and glory thru victory was a theme, a life for a life a common practice, vindictiveness inherent in their nature, and plunder an activity they all enjoyed with great affection. There was no desire for peace – that would be no fun. Education was not pursued, but there existed oral tradition relayed through poetry. History for the area is lacking. Life was day-to-day – just to exist.

To the north, in areas today Jordan and Syria there were Christians, the Ghassinids. To the south, Yemen (Najran – the center) were Christians influenced by the Ethiopians (from the west across the Red Sea). Jews, vanquished by the Romans, that escaped Israel after the conquest and destruction of the Temple (CE 70), migrated into Medina (Yatrib) and became economic leaders. They were in Khabar also (80 miles north of Medina), as well as Umm-Al-Qura (near if not Mecca – 70-80 miles southwest of Medina). They were farmers and the industrialists of what industry existed. Arabs and Jews practiced usury mainly to finance goods carried by caravans from Syria to Yemen and to the east to Bahrain. The Arabs maintained a slave trade as well. Those that loved their possessions were the atheists – materialists, the Sabines worshipped the stars, many were idol worshippers and polytheists, and certainly Jews and Christians. Dualists, having two gods, good and evil (Zindigs), were found to the east in Persia. Followers of the prophet Abraham were called monotheists, a culture into which Muhammad was raised.

With Muhammad came a change, unexpected; some refer to him as an ‘emancipator’. He provided structure and purpose to those who then became followers. He took a dirty society polluted with sin and applied biblical principles of morality and ethics learned from his wife, her cousin, Warraqh, and during his travels as a trader. He started a process to civilize an uncivilized society. He energized Arab people on the verge of extinction, their survival the only passion they had. He had a sense of politics and his leadership abilities enabled him to unite a disparate empty culture. It is called a time of ignorance into which Muhammad introduced practices to reduce corruption, give women unheard of rights (then), encourage thinking, and in many ways he altered the focus on material wants. Incongruous as it may be with a more developed society Muhammad wanted the humans to replace the idols of their lives, to include the gathering and collecting of goods for personal use, with his supernatural one god – Allah.

Muhammad formed his own Tribe (the Muhammadians, or the Islamists) whose members today refer to them as Muslim. What started as a peaceful and tolerant approach to bringing as many as possible into his fold, Muhammad as he aged and progressed became impatient, more militant and less of a disciple for what he believed and more of a conqueror, converting by force, to grow his constituency. He practiced ‘terrorism’ as we see today engaged in by the Islamists such as ISIS (or ISIL), Al Qaeda, the Muslim Brotherhood, and affiliates – he is their example.

As a warrior general and accomplished trader he was more effective at spreading his philosophy, as were his successors, than Christians.  After his death Islam developed rapidly via military incursions and conquests, show by the following map: 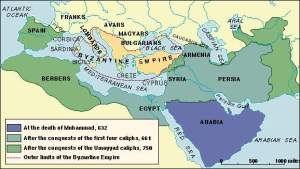 Muslims came from religious groups that today Islamists continue to attempt to destroy or convert. Of the billion plus Muslims, if they researched their heritage, the homelands of their ancestors, upon discovery they will realize they are from Yemen, Alexandria, Spain, Armenia, Mesopotamia, Persia, Turkey, Ethiopia, Algeria, Morocco or other areas that are part of the Middle East, the Iberian Peninsula, Asia Minor, Turkey, Africa, or southern parts of Russia. They will realize too they are the descendants of anything but Islam. They were once free people. Even those from the Arabian Peninsula have a history of being Jews, Christians, Zoroastrians and atheists.

Idol Worship – (a side note)

Many humans today worship items other than God, such as money, their cars, their homes or land, themselves, or other possessions – called idols. But what is missed is not the material, but the material as a substitute for knowing God. It is not what we gather that is wrong, but why we gather it and how we use it. If what we do we do to serve and honor the Lord, we are seen as justified, and purposed by God. The focus is the heart, how and where our heart resides. Does it live for the eternal kingdom or for this life and only the here and now? A relationship with God is possible (not Allah) and such a relationship opens the eyes and mind, welcoming the spirit of the Lord, and gives us reason to live, a life well intended, and a future assured.

People like me, Islamists claim (feeling persecuted), are attempting to corrupt your thinking. We are labeled Islamophobic. When the fact is we are trying to open eyes and hearts to see the world around differently, objectively and to engender independent thought. You might be dissuaded into not accepting Allah or Muhammad. You might begin to see these ideological characters for who they really are, how they represent Satan more than God – evil more than good.

A foundation of the morally vapid Arab world of Muhammad’s Arabian Peninsula soon corrupted this leader and his followers. The internecine wars among factions, sects, and tribes of Muslims continues. To those outside, they are but game-animals to be hunted and slaughtered. They enjoy war, but now call it Holy – Jihad. They love to steal, not just possessions, but the hearts, minds, and faith of others. They wish to destroy God. Muhammad succumbed to the historical activities of the Arab when he resorted to marauding to build his treasury, killing to maintain loyalty and grow his army, death to the infidels that would not follow, and terrorism to force conversion and to develop a constituency from which a tax could be extracted (Zakat) and his laws (and those of the men, the Caliphs, who followed assuming his authority, and giving credit to Allah for their victories) could be imparted. It became a must to not allow other religions to proselytize, imposed first by Umar (the 2nd Caliph), to assure the base of worshippers that knew the Truth (the Biblical Truth) would not expand or grow.

Even the devil knows he cannot kill the spirit of the Lord, but he will continue in an effort to do so. Allah has become his avatar.

Certainly Muhammad made life better for women. They were as animals with a human use to procreate. But too many girl babies and the next one would be buried alive. There was no inheritance. He gave them status – limited by modern standards. It was a start. He gave them a voice, limited also. They were to be protected, but kept as chattel – possessions. Never free. They were owned. They had some rights, some inheritance. They could be enslaved. The non-Muslims still remained as only serving a purpose, not required to be covered, half-naked even, marked (tattooed) to be used and abused. Young men, non-Muslims, became eunuchs, castrated, their penis and testicles crudely removed (in most cases resulting in death due to an inability to pass water), to be trained as guardians of the women they had in their harems. If one died they were readily replaced. This was the will of Allah. So they claim. But I say it is not God’s will.

History for Islam is stalled in the 7th Century, the duration and time of Muhammad. Progress was in the air then, but stopped. Why has Islam not recognized what Muhammad begun and continued to evolve? Modernity has been embraced by a few.

Ataturk of Turkey in the early 1920’s is one. He dissolved the Caliphate, the Ottoman Empire, and Westernized (a term that viewed developed countries as positive – America the example) while embracing capitalism. The recently elected President Erdogan is seen by many as in the throes of reversing this trend. Afghanistan before the Taliban was much freer, the women educated, and the streets filled with people in modern dress, men and women walking side by side. Iran, once progressive, has been stalled and their culture stymied by the regressive Khomeini.

ISIS, the ideal of a Caliphate, reconstituted, a King, Caliph, of the ideological All-for-Allah, enthroned to raise the fires of Hell onto the surface of the earth. They begin by destroying those of their own, tribes with parallel foundations but differing interpretations, their leaders ignoring what is true to one but not another. Kill them. Destroy their houses of worship. Drop the bomb. Murder the dissidents. Hang them, behead them, crucify them, and/or do as you wish with them. Enslave the women. Decapitate the Christians, their babies too. Same for the Jews, until there is not one left. Restore the order of the new Caliphate to the Temple ground upon which the Dome of the Rock is built. They have proclaimed Jerusalem to be the center for Islam. Then continue to steal, to threaten, to kidnap, to ransom, to sell slaves, to insure their survival. All this using Muhammad as their example. The time of ignorance continues.

Know Who You Were?

If you knew who you were before Muhammad, then return to the heritage and the culture and the religion from which your seed was born. The seed of Isaac led to the birth of Nations and the freedom of mankind, to those who understand and accept the sacrifice Jesus made for you and me. Be a slave no longer. Accept the freedom God has made as a gift to you. Allow his spirit in so you too can come to the gate of the Celestial City.