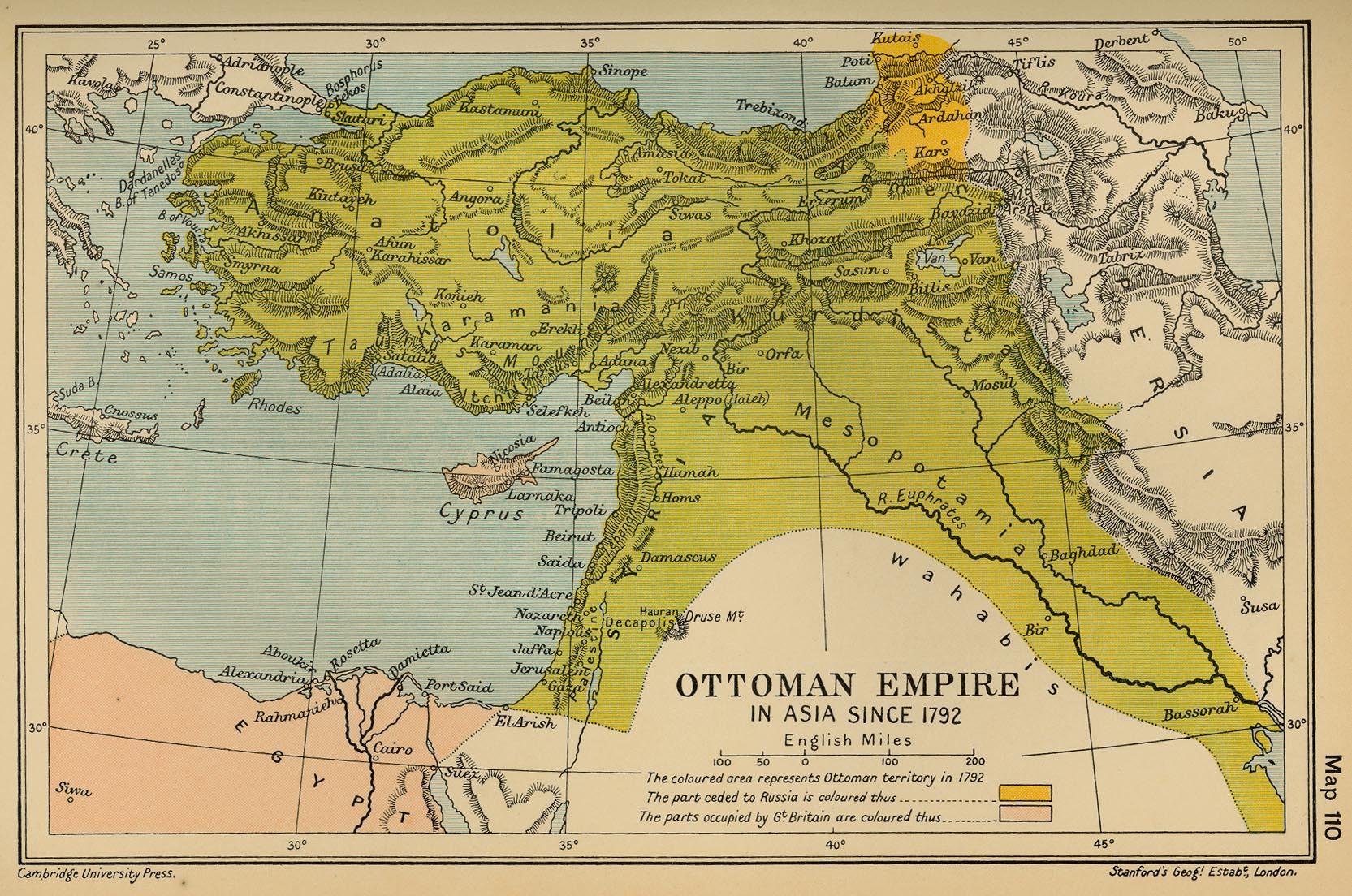 At the end of WWI what was the balance of the Ottoman Empire was no more. Occuping the land was Syria, Lebanon, Iraq, Israel, Jordan and Turkey, much of Saudi Arabia too. The areas were designated by British and French administrators in a formal agreement referred to as the Sykes-Picot Treaty.  Much was in place at the end of WWI, in 1920.  It took many years to fully orchestrate.

The transition was not that easy. History provides an interesting picture, all depending on the perspective from which history was recorded.  Here are my insights.

The Ottoman Empire ruled a large area, headquartered in Istanbul, for 400 years or more. Components were assembled from around the time of the Crusades, year 1000, and became the dominant Islamic Empire and Caliphate in the mid 1500’s.  Whereas Islam was born in the desert of Arabia to tribes predominantly Arab.  The Ottoman Empire was the result of the Turks, the Seljulks and the Mamluks. A Turk by the name of Osman, a Turkoman, is the derivation of the Ottoman’s. He made the obligation of all his followers Ghazi, or war (wars of conquest), war against unbelievers. The politics of the principalities of his domain, called Beys, was of less importance than defeating the infidels. More on this Empire was in a prior blog (The Ottoman Empire).  As noted in the referenced blog, “The citizens of the Ottoman Empire, Turks, were born from the loins of Pagans, Jews, Zoroastrians, Christians, other religious groups that preceded Islam, and Arabs, who became Muslims by coercion and birth. The Christians were, however, a principle target of the aggressive Muslim raiders. The heritage of the Ottoman’s were Egyptian, Persian, Augustinian, Carthaginian, Moroccan, Algerian, Berbers, and mostly Turks, among others.”

At its height it controlled areas along the north African Coast, from Morocco to Jerusalem.  It held sway in Arabia on its western coast along the Red Sea.  North it grew into what is today  Turkey and much of the Balkans. By the time of WWI the Ottoman presence had been reduced to the west coast of Arabia, north into Turkey.  Egypt was lost, controlled at the time by Mamluks, in the late 1800’s, when Napoleon invaded.  The Balkans War captured back lands in the early 1900’s, by revolt of the people.

At the beginning of the 20th century the Ottomans had established schools, educating many of the elite.  There was an emphasis on military training.  Trained and educated graduates became leaders in areas governed.  Infrastructure was  modernized, roadways and railways, as well as communications with telephone and telegraph. Educational institutions, technical and vocational, were built and scattered throughout the Empire.  A major rail yard in Syria, the al-Qadam, significant to the maintenance and operations of the whole of the Ottoman rail system, still exists. Justice for all citizens was improving as were relations with European areas, such as a united Germany. For several centuries there was peace and prosperity in the Ottoman lands.

Techniques of governance and military training were influenced by the Prussians, as members of the Empire were often taught using defining and instructive manuals translated into Ottoman Turkish. Trends and processes in Europe were also taking place in the Empire.  Many of the Great Powers, France, Britain and America, saw the Turkish empire as illiterate, and impoverished.  The existence of a royal order in the Empire and the tyrannical nature of the Turks created populist outrage.  Islamic rule and Law was seen as barbaric.  Culturally specific to the Ottomans, as described by Michael Provence, The Last Ottoman Generation…., (pg. 14) were “the Ottoman state, …common state culture and invented traditions focused on Islam, the sultan and caliph, the glories of the Ottoman and Islamic past and the anxiously hoped-for return to splendor and worldly powers.”

Michael Provence wrote, (pg 14), “…a mass conflict finally engulfed Europe in 1914, the monarchs of every combatant state except Britain were among the casualties.  The royal houses of Russia, Imperial Germany (Prussia), Austro-Hungary (Habsburg), and the Ottomans, all succumbed to the forces unleashed by nineteenth-century modernization.

WWI ended the Ottoman Empire and the German monarchy of Wilhelm, also the Russian and the Hapsburg monarchy.  Few remember where or why this tragic war began. (WWI – Wikipedia). It was the assassination of the Austro-Hungarian heir Archduke Franz Ferdinand in Sarajevo.  Millions of lives were lost, empires destroyed or weakened, to include Great Britain. Much of the world was reshaped.

Standing armies by all the nations involved were decimated and the taste for war became bitter.  Conscription (turning everyone into a soldier) was necessary, especially when the state itself was in jeopardy. Conscription taught a lesson in the value of a volunteer army,  Loyalty to the State was demanded, while there was a realization and fear of citizen-soldiers and potential future revolutionaries capable of overturning a sovereign and his sovereign state.

Thinking about Islam which has influenced the world, then and now, came from Winston Churchill, from his book (published in 1899), The River War, “How dreadful are the curses which Mohammedanism lays on its votaries! Besides the fanatical frenzy, which is as dangerous in a man as hydrophobia in a dog, there is this fearful fatalistic apathy. The effects are apparent in many countries. Improvident habits, slovenly systems of agriculture, sluggish methods of commerce, and insecurity of property exist wherever the followers of the Prophet rule or live. A degraded sensualism deprives this life of its grace and refinement; the next of its dignity and sanctity. …in Mohammedan law every woman must belong to some man as his absolute property—either as a child, a wife, or a concubine. (Islam) must delay the final extinction of slavery until the faith of Islam has ceased to be a great power among men. Individual Moslems may show splendid qualities….But the influence of the religion paralyzes the social development of those who follow it. No stronger retrograde force exists in the world. Far from being moribund, Mohammedanism is a militant and proselytizing faith….”

Such thinking effected world attitudes towards Islamic nations and the Ottomans. The qualities of Islam were seen in fantasies, aberrations of the truth in harem settings, colorful dress, facial coverings as demure, and the red fez.  The aggressive and violent nature of Islam was not overlooked. The great powers saw Muslims and their governments as ancient and ignorant.

After the War the great powers collaborated on the spoils of the Ottoman empire.  Ignored was any progress made by the Ottomans and the beys, or smaller states within the Empire. They had ideas to share about their people, their needs, and their capabilities.  The victors received missives, put aside for future reading, or simply dismissed, thinking their judgement was more valuable, their cultural habits better and the residents would benefit. The League of Nations framed programs for the mandates of areas to include Palestine/Israel, Syria, Lebanon, Iraq, and Turkey.

Lines were drawn by the British and French, Sykes and Picot, that define what today is Turkey, Syria, Iran, Lebanon, Jordan and Israel.  Much was overlooked in the process, to include ethnic concentrations, such as the Kurds, and the divide between Sunni and Shia, Christians and Muslims, and others. Had more attention been paid, respect and an ear for requests and considerations by Ottoman citizens and representatives, the borders might be quite different today.  Whether there would be greater peace is another issue. They moved forward without the value of input provided which may have altered, for the better, the boundaries.

An impression of mine.  The European leadership whose advisors knew history were well aware of the history of Islam and the resistance mounted towards the intended objective of the jihadists to continue their conquests into Europe.  The All for Allah scenario, a global Caliphate, did not fit well with the free world outside the Ottoman Empire having embraced Christianity and the freedom and truth supported by the bible.  There were the interests in resources and trade routes in lands under Ottoman authority.  Both factors influenced the decisions made by the Great Powers.

What transpired after is important when understanding History and how a few political leaders, heads of State, can change outcomes and impact the world as a whole, especially the citizens under their leadership. Facing complex matters, decisions made, those deciding could not see the whole, only those parts most essential to their interests. Some interests were selfish and personal, others influenced by incomplete facts or a lack of proper understanding.

(to be continued) – The next blog continues and what is noted is that the world has allowed Islam to enter areas that heretofore were obstacles, where wars were fought and won to defeat Islam from entering Europe.  UI – Part 646 – Gates of Europe Open to Islamists