Sura 3.96 says, “The first house appointed for men is the one at Bakkah.” Interpreting Arabic is not an easy task. Many definitions or outcomes can result. Citing Mecca as the first house of worship is the choice of the Islamists. But when God spoke of being present where 3 or more are gathered (Matthew 18:20) suggests the first house of worship was when people were together praising the Lord. That is where God will be present. It is the more logical of explanations. And it did not first happen at the dawn of Islam, in the 600CE era, nor was it or could it be backdated.  Bakkah means “the crowding together of men,” so suggests Muhammad Ali Maulani, a favored translator of the Quran into English. So now Bakkah is Mecca and a gathering of men.

Muhammad when he first moved to Yatrib, his ideology established as a religion, having Allah as god, he called for prayer facing Jerusalem, continuing a practice begun in Mecca (Bakkah).  Where a Muslim faces during prayer is the Qiblah.  From 610 to 623 Muhammad had his followers faced the Temple in Jerusalem.  That was the Qiblah. But about a year after emigrating from Mecca to Medina (Yatrib), in 624, the Qiblah became Mecca, the site of the Kaaba. The story is told that Allah spoke to him during prayer and may have said, “Muhammad, that is not right.  You need to face Mecca.  You’ve been doing it wrong for 13 years.”  Another abrogation of the practice of Islam. In unison as Muhammad altered his direction during prayer, the others followed.  It is a unity thing, where the community of Islam, the umma, faces the same place as one.  That is a concept with merit, but it is a program, not a matter of faith.  Does the direction really matter?

It has been suggested that the Jews, of which there were many when Muhammad first moved to Medina, thought Muhammad was exhibiting through ritual and practice a leaning towards becoming a Jew.  Prayer facing the Temple in Jerusalem was an indicator.  Realizing that, to refute this assumption, Muhammad altered his Qiblah.

The Sacred Mosque is in Mecca.  It is also the house of worship Muslims consider the first.

As an aside, prayer is a conversation with God.  Yet for the Muslim there is a rote element, words repeated with each prayer session, an obligatory speech that is more akin to altering the brain, as to be brainwashed, than allowing for a personal relationship with God. Allah becomes the focus and Muhammad the messenger, a required mantra to insure the followers of Islam do not stray.  For those that know or realize the truth, concern for the habits, the militant practice of Muhammad, and his authoritarian demand for loyalty, at the risk of one’s life, can become a problem.

Doubts raised and difficulty with identifying with a sinful, vengeful, hate filled, self-proclaimed prophet may turn the heart, mind and soul towards a different pathway to a life eternal, on earth as it is in heaven. Watch this video clip to see one Muslim’s reaction to realizing the truth (view).  Have a laugh (it is subtitled), but it is serious too.

God is omnipotent.  His presence is everywhere.  You can pray individually and you will be
heard.  Be thankful. Praise him.  Adore him. Confess your sins and atone. Be thankful for all he has done, never forgetting the saving grace of Christ on the cross and make your requests known to him.  None are too big for God.  Worship as a community with others and share the hope and joy of your assured salvation when believing in Christ and filled with the Spirit.

In some respects this is a silly discussion.  We could find/locate the first home church, Christian Church, or the first Jewish Temple.  The Mesopotamians built 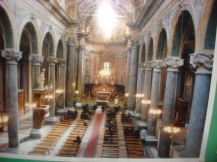 temples for their gods, a polytheistic lot. The Egyptians built temples for sun gods and other monotheistic gods. As for the Arabs, if indeed the first worship center was in Mecca, it was the Kaaba.  Until Muhammad the Kaaba was a cube containing the gods, the supernatural spirit representatives of a multitude of gods, reflecting upon a multitude of religions. Those worshipping were not even Muslims.  Yes god, in Arabic, is Allah, but too it is the moon god, it is anyone’s god, Allah.  Even the biblical God, as Jesus, was in the Kaaba before Muhammad came in and destroyed the 360 idols on display leaving his personal choice.

There is no first house of worship.  It is your house, your neighbors house, your church, an open field, and even your heart. God loves you.  Love him too in prayer.