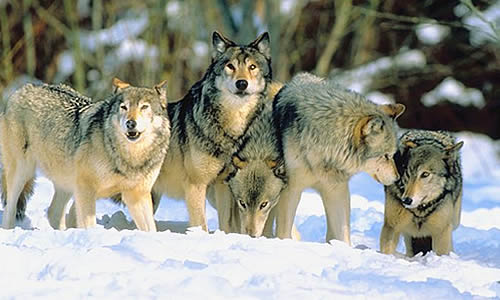 Deputy assistant to the President Dr. Sebastian Gorka using the term ‘known wolf’ aptly describes the problem we face with Radical Islamic Terrorism. It is not the ‘lone wolf.’

Whether home grown or arriving from foreign countries the source of the violent nature of the criminal acting for Allah is the Quran and the example, Muhammad, as recorded in Hadiths. The compilation of practices using terror tactics, instilling fear, has been ongoing for 1400 years to spread and gain territory under the flag of religion. It is a purposeful ploy to confuse the enemy who loves God and cannot comprehend a religion that intentionally kills those who do not agree with their philosophy. The Islamist’s outline for a way of life is a control mechanism. The leaders have discovered the benefits they derive, in power and wealth, when Allah, their god, is credited with preparation of the pathway, actions, habits, and requirements to be their army. Their loyal legion is trained to fight any resistance to their aims. The god is manmade, not supernatural; a fake god.  Biblical references have been used to seek as much credibility as possible. The value has been apparent in its deception, a perfected practice of Islam, gaining followers believing in something greater than themselves. The lemmings also want to be part and accepted as a member.  Once loyal to the program, rewards given, there is no leaving, no objectivity permitted. The escape route is only death.

The problem with politicians, especially the liberals, and even more so the liberal progressives, they buy into the Islamists referring to Islam as a ‘religion.’  As much as they dislike many aspects of the Constitution they want the freedom of religion clause to protect an ideology of which they are completely clueless. Obama, as an Islamic sympathizer, one who preferred ‘appeasement’ to effective leadership, set the stage for a soft approach to Islam. His refusal, and having the chorus of Democrats join him, to apply the proper reference ‘radical Islamic terrorism’ to foreign and domestic incidents where innocents were killed with the words ‘Allahu Akbar’ (Allah is Great) had its effect. He tainted the minds of these obsequiousness lemmings who then fell into the same trap as if set by Muhammad himself. They believe there is peace in Islam. There has never been peace in Islam, not even in majority Muslim countries.

So caught up in the liberal progressive dogma and hypocrisy are the LGBTQ set. Members and supporters of Obama, Hillary, and those who cater to them as a minority.  They blindly side with the Democratic talking points. They are ready, prepared, to defend anything done by the leaders of their Party, whether true or false, right or wrong, as it is their truth that matters. It can be made-up as they proceed if necessary.  They call for curbing free speech when Islam is in the crosshairs. Yet it is a fact that Islamists hate gays and lesbians. They freely express their strong belief such persons are perverse, commit grave sins, are a blight on society and must be removed. In Iraq, ISIS militants, Sunni and Shiites have thrown gay men from multi-story structure rooftops to their death. Are American liberal LGBTQ’s inviting their own demise by welcoming Islam and Sharia Law?  Or are they just so caught up in liberal vitriol they agree without thinking that an open door policy towards Islam adds another minority victim voting block to the Democratic Party.  After all criticism of any minority must be resisted, right?

Over Zealous Defense of Islam

What is truthfully disturbing is the extent to which the Liberals come to defend Islam immediately after horrendous killings take place by one or a group of Islamists. Using the word “radical” they suggest puts a spin directly onto the fact that the perpetrators are less radical, in their view, than true believers, Islamists, of the ideology. Compared to other true religions Islam is radical in and of itself. There is not one Christian church or Jewish synagogue that preaches from their dais hatred towards non-believers or calls out for its worshippers to go forth and kill the infidels. But in mosques and madrassas throughout the world that is common verbiage spewed by the Mullahs and Imams and those teaching their people. And the liberals still refuse to see concerns expressed towards this hateful rhetoric, calling for war against non-Muslim persons, as anything but Islamophobic. What are they missing or what are they so ignorant or blind to that has them effectively helping the call of the Islamists for a Sharia compliant All for Allah world?

A New View of Islamic Terrorism

America’s new president Trump is not of the mindset of the liberal cabal. He understands and his advisers understand. As he fights in general those who lost the election, their candidate Hillary anyway, he will also feel the wrath of the associations favoring Islam. They point to the moderate majority who are peaceful. I believe they are more silent, ignorant themselves or apathetic, yet represent the potential for radicalization. The moderate Muslims are as a significant seam of precious ore that can be mined to produce the results desired. Radicalization, becoming a loyal subject to Islam, understanding fully the directives set forth in the tenets of the ideology, and becoming a devout follower of Allah and his messenger, Muhammad.  The moderates  fear for their lives, more Islamophobic than those described by the media or the Islamic support organizations, as their lives are in jeopardy should they leave. That is the true phobia, a fear of dying. They are more a target of the Islamist death squads than the non-Muslim if they choose an alternative path such as atheism, Judaism or Christianity.  Keeping the legion of Muslims together, as cultural or devout, is the objective of the Apostasy Laws of Islam. To repeat, the existing collection of Muslims is the greatest source and potential to add to the killing squads for Allah, fully obeying the leadership to which they kowtow.

Islam as a religion of peace is mumpsimus. The liberals adhere to this claim as the Islamists find it useful to repeat and repeat thinking the more it is said and repeated the

better chance it will be accepted. It is working with the liberals, unfortunately. It is either proof the liberals are lacking a desire to be informed, or find in the Islamic community a minority that can cast ballots in their favor. They are no less power oriented than the wanna-be Caliphs.

Teresa May, the U.K. Prime Minister, referred to the attacker on the Westminister Bridge in London,  in which many deaths resulted, as having nothing to do with Islam.  It was a “perversion of Islam.” Now that is an example of what I speak. The murderer was a Muslim, whether home grown or not; he was inspired by ISIS. He spent time in Saudi Arabia as a teacher of English. He went to mosques there. He returned to the U.K. as a changed person, a cultural Muslim who now knew his ideology as a learned student. Jihad became a calling, just as all true Muslims are to understand; the Sura 9 (Immunity) spells it out clearly. This act was not a perversion, was not abnormal, in any way. It was what Islam calls upon its followers to commit. “I have been made victorious by terror,” stated by Muhammad himself and recorded in the Hadith, Bukhara 4.52.220.

The Muslim scholars will often revert to verses in the Bible that call for actions they deem comparable. There are none in the New Testament. However what they fail to comprehend is that it is God that will punish, not humans. God even informs there will be false prophets, men who claim they act for God; however, no individual has that right.  They are imposters. They are seeking to make themselves powerful. They are selfish users that distort the truth for their own convenience and desires.

Known Terrorists in Our Midst

Many of the recent killings by Islamists that were born in the country where their personal vengeance was carried out were persons with criminal records. They had a habit of committing crimes, of a lesser nature, yet sufficient enough to place them on the police, even the FBI, radar. But the police cannot follow every such person, and there are far too many, effectively, to prevent future calamities in Allah’s name.  Trump has taken a position to do something about this.  There are those who resist Trump’s efforts only because of Trump, not due to the logic, the security and safety enhancments, of his orders. Those homegrown today have roots back to Muslim countries as well as access in their homelands to the vicious diatribe of hatred towards infidels and a world conquest sought for Allah.  Islam is an ideology of imperialism. It is not a religion, although masked as one. In it’s practices it defies logic and lacks any element of love. It cares little for others, even many among their own. It is demonic. It calls upon all Muslims to act to advance the ideology, with knowledge or blindly, become more devout, practicing what others have done before them and even inventing new ways to create terror and fear and accept Islam or die.

The lone wolf, the known wolf, the pack of wolves from far away shores, the sociopathic wolf in Islamic dress, and the devout Islamist as the lead wolf make us all uncomfortable.

Our President and his Administration has recognized and spoken out against the demonic nature of the Islamic ideology.  We must join him and embrace his efforts to make America more safe, again.  The previous Administration represented a set-back for our Nation.  We now have what appears to be a proper focus on the illegal and threatening elements that are entering America or already here that must be watched, followed, policed and prevented from harming any more of us.  Europe needs similar leadership and awareness to prevent Islam from growing in strength and changing the culture and laws of each member of the EU.

For those who are awake, they too may need to awaken to God, our creator, and spend more time praying for his grace, changing their lives and helping to bring peace, especially in the areas where the Islamists are most active and spreading their imperialistic controlling theocratic ideology.