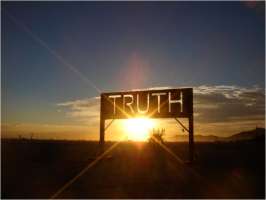 As to fact, such as scientific fact, there is truth that is knowable. It is empirical. Is it only science that is true knowledge?

Then there is moral truth. Subjects that are fodder for debate often find each side choosing their truth, a truth they prefer, or a truth that makes them more comfortable. It can even become a truth resulting from a collective majority in agreement. My truth may not be your truth. Is it right to lie, to cheat, to steal, to commit adultery, to throw eggs at a passing car, to embarrass another, or to bully a weaker person?   Is it right to persecute or mock those who disagree?  Or for another to have an ideology at odds with your own, or with your culture?  Islam verses a free society, for example.  Freedom is anathema to Islam.  Does that make freedom untrue, or Islam the real truth?  If your truth as expressed has a purpose, an objective, if achieved, is that justification or an affirmation of your truth?  When protestors commit acts of violence are they doing so to enable truth to be heard.  Consider Black Lives Matter. Is that more true than White Lives, Police Lives or All Lives Matter? And what is that truth?

Science is supported by fact.  Until a theory is proven, it is just a theory, an idea, a thought.  Once proven, conclusively, it is moved from the list of ‘what if’ to ‘what is.’  It no longer is subjective, but objective, having no dubious element.  It becomes empirical. It is actually true.

When it comes to values, value judgments, ethical and moral values, what can be said that is actually true?  There is a divide, facts on one side and values on another.  Can moral ethical values exist on the fact side?  The fact side is decidedly true.  What about the value side?  Can there be a united truth that is scientific and moral?  I guess it depends upon whether or not the moral value is actually true!

Religions fall into the ethical moral dilemma of deciding which is true.  Is one religion truth and another not?  If true then it is no longer subjective.  Is there a religion that is not subjective?  Where the truth is actual? Objective truth?  Thinking one religion is true, thus others are false suggests, “be(ing) disrespectful,” according to Nancy Pearcey, her book, Saving Leonardo, (pg. 33)

With progress comes the use of the word, ‘modernity.’  Is that a good or bad concept?  If becoming modern reduces religion to a sense of spirituality, God a mythical creator, subject to debate, that allows for truth to become a preference, a comfort, and not necessarily universal, then values will be inconsistent.  Laws will vary.  Some say abortion, some say murder.  Some justify killing infidels, others say love your neighbor, regardless of race or religion. Some say freedom of speech enables one to mock, others write hate laws. One says Christian, another says Islam, another Hindu, and so on, and then there is the Co-exist group.

As societies modernize, it is said, they secularize.  The more advanced, the more secular, the less religious.  With this progression in mind is God being taken from the platform of justice, governance and legislation.  Is divine law looked at askew, no longer applicable, and only man’s experiences factored into decisions regarding common law?  Is the church being relegated to four walls about its congregation, its voice constrained to the indoors, not the public forum it used to be part of?

“Let’s talk about God.”  If that is suggested in the public square, how many today would stay for the discussion?  Those who remain would they be senior citizens, millennials, or young?  Would they be white, black, hispanic, asian or mena?*  Would the police arrive to disburse the gathering as the speech does not comport with the desire of the government or those being governed? I do not have the answer, but I can say that from a government perspective the preference would be that everyone leave.

Our government has been demonstrating the repeat of history, that which has taken place in Europe, as an effort has been underway to reduce religion with the critique that it is  “an opium for the masses.”  The government does not need religion. The elitists in control can decide sans God.  Eradicate religion from public view. The leaders tell their constituency they will provide, leave it all to them, they will make you comfortable, secure, safe and happy. You do not need God.  Leave religion to private lives, and not have the word of God spoken as to influence decisions made by members of parliament and or Congress.  This fits the talk about separation of church and state, which is falsely credited to our Constitution.  It is in the view of many, an expressed aversion to objective moral truth, that desires the church be seen but not heard.  Truth of a biblical nature is not needed.  What exists is a penchant for relativism.

Keeping God at bay is the desire of those wanting to change our Constitution. The founders, the majority lawyers, were careful to insure God had a say in our governance and our laws. Along came the secularists and attacked this document. “It is a fluid document,” they say. It is a fixed document in reality, but inroads have been made. An analysis of decisions of the Supreme Court indicate attempts to make law. These judges are given lifetime appointments to insure the Constitution stays in tact. It is Congress that is to enact laws.

Keeping God on the Outside

Moral truth for some is what makes them feel happy, and if that is the case, it must be good.  Like the song. (“If it makes you happy, It can’t be that bad”)  The governments seek to become the castle, a stronghold, that keeps God outside.  The moats are widened daily to push God further away.  The proclamations to the people are that God is not needed, at least when the politicians listen to the people and give them what they want.  The Courts are asked to comply.  The Constitution, a static document, is called upon to be fluid, to change with the times, but that was never the intention.  It, however, is the desire of the secularists. They want to put into office those who will adjust to their reality and not the truth, making their reality the truth.  But is it?

“At one time the Consensus gentium, or agreement of mankind, was regarded as a criterion for truth.  Universal agreement has long since lost standing,” so claims William L. Reese, in his Dictionary of Philosophy and Religion (pg 783).  But are the secularists trying to use this approach, not necessarily to have it return, but to build their voter base by yielding to their ‘feels good’ desires?

Clinton as President would prefer the truth to be Clinton-truth, the truth they perceive as suitable for the people, at least those who support them.  It is the atheists and elitists who benefit and prosper along with them by their power, their control and from the base they establish. They have a secular worldview. What is said publicly is not what is practiced privately which Hillary admitted in an email to her campaign Chairman John Podesta.

And what concerns many, expressed by Nancy Pearcey, “Parents invest enormous amounts of time, money and emotional energy into raising their children, only to lose them to secular worldviews pounded into their minds through public education and the entertainment culture” (pg. 13).  These cultures, education and entertainment, were catered to by the Obama cabal and also Hillary.  During her campaign it was clear that Hillary, if not expressed by her directly, expressed by her staff, was anti-God, anti-Constitution, anti-gun, open borders, secular, against those considered irredeemable (the deplorables), against rednecks (expressed by Bill), hypocritical (allowing choice for women, as to abortion, but not for workers, anti-right to work), and a transfer of wealth advocate (increasing taxes for all high-income earners).  She wanted everything free, but not the freedom of churches to display and proselytize in public. America should be (andd apparently was) concerned that the Democrats, as did the Obama Administration and potentially the Clinton Administration, be allowed and enabled to continue to form a platform of their own ideology.  But now there is a different viewpoint on the Hill.

Free education in public universities will only expand the secularist view.  Take the child from the parent and begin to indoctrinate them into the “if it feels good” culture.  Unfortunately if left to continue that culture will ask, as does the Sheryl Crow song, “If it makes you happy, then why the hell are you so sad”  The answer, there is something radically wrong and absent.

That vacuum exists in the secularist view, like the void when creation began.

Philosophers generally agree that truth is what a collective body may agree to as truth.  An audience listens to a debate.  There are two sides to the issue.  Each team presents its side.  The audience hears both.  At the conclusion the audience is asked to press a red or green button, representing the respective debate teams.  The majority agree as to one of the colors.  Is that side, that team, then speaking the truth? What are the facts?  What is most reasonable? What is self-evident? Is all that is true subjective? Can truth change, can it progress? Are there degrees of truth? Does there exist that which corresponds to the truth? Is good an inherent truth, as well as evil an inherent truth?  Are good and evil innately known? Universal?

But when it comes to the definition of “is” as expressed by the past President Clinton. “There is nothing going on between us,” he stated.  If the reference to the Lewinsky affair was now, then “is” would not be true, it would be more ‘was.’ Bill Clinton was called by one reporter ‘existential Willie.”  The question asked in the present tense, answered in the present tense, “no.”  It is one’s defining truth.

The Word of God

But there is an answer to the existence of a universal absolute objective moral truth.  It is Biblical Truth. Aquinas noted, according to William L. Reese, “since God is His own truth, the ideas in the divine mind are true whether they correspond to anything outside God or not.”   Has the mind of God been relayed to mankind and the truth outlined, ethical and moral truth, to the extent it is totally objective.  There is no subjectivity.

Can there be a truth, as to moral truth, that is beyond intellect, that is absolute?

We need a new creation, a beginning, a rebirth, a reformation, a return of Biblical Truth.  That will be discussed in the next blog.  The facts of science that generate objective scientific truth are as compelling to knowledge as the facts of God’s Word, that which has been affirmed as truth, an ethical and moral truth that is absolute. Splitting hairs as to moral truth based upon personal or secular desires, diluting God’s truth, is a convenience, but it is wrong.

Past Blogs have touched on this topic.  One in 2015 discussed truth and freedom (read here)

• ‘mena’ is the new race categories suggested by the Obama administration to categorize those from the Middle East Northern Africa regions of the world.