The Christ follower is saved by the substitutional sacrifice Jesus made, god-incarnate, for the follower, everyone who understands and accepts the free gift God gave mankind. All can be a follower of Christ. Accept the truth of the cross and resurrection. The Holy Spirit will enter your being as your heart is changed. You are saved. God made a sacrifice to restore his children to his family making them right again.

Humans were made wrong when Adam disobeyed God and the sinful nature of man invaded the very self of everyone. Satan gained control. The Bad News which we must accept is that we are sinners. No one is righteous. Punishment is needed.

“…Just as sin came to the world through one man, and death through sin, and so death spread to all men because all sinned” (Romans 5:12).  Death became spiritual, physical and eternal.

Jesus took the punishment we deserved and died to sin, our sin, only to rise again to overcome death. Every follower of Christ died on the cross with Jesus, severely chastised, to be born anew in spirit. This was all forecast throughout the Old Testament.  This is the Good News of the Gospel.

“As I delivered to you as of first importance what I also received, Christ died for our sins in accordance with the Scriptures, that he was Buried, that he was raised on the third day according to the Scriptures…” (1 Corinthians 15:3-4).

As Christ followers we are reminded to have faith, as we are justified by our faith in Christ. We need not earn our salvation. God has provided the eternal life we seek for free. Free stuff is always welcomed; this is the best free gift anyone could possibly receive.  We must just believe in Christ and express ourselves with our heart and our voices. The good we do becomes a matter of course, doing so out of love for God and neighbor, and because we want to.

“If you confess with your mouth that Jesus is Lord and believe in your heart that God raised him from the dead, you will be saved.  For with the heart one believes and is justified, and with the mouth one confesses and is saved”  (Romans 10:9,10).

Look at it this way.  Jesus lived as a man and died as a man.  When he died he became us, and thus we also died on the cross, substituted for Jesus.  He bore the burden of mankind and God was able to restore those who accept this free gift of Good News.  Jesus died.  Believers are Saved.  We then become Christlike, akin to a transference. It is as Christ occupies the body of the newly born. Christ was raised, his divinity returned, his spiritual supernatural being restored just as man’s spiritual nature enjoys a new birth occupied by God.  The Spirit of the Lord indwells in the heart of the believer, the Holy Spirit.  What happens next is the believer obeys God, in effect maintaining God’s laws, out of love and gratitude, knowing also that their salvation is assured.

All religions say the word of God reminds us to have no other Gods first. God must be our priority. We are then purposed to do as God prepared for us to do.  Placing anything else, to include self, on a pedestal above God is a sin.

God tells Christians they have been freed from the laws, as they know in their heart right and wrong, good and evil.  The Holy Spirit within reminds them of the path upon which they walk and must remain.  Jesus becomes the example of loving, caring and what is right. The believer becomes the embodiment of Christ on earth.  The laws are not ignored.  They are followed, but not as a requirement for salvation.  That is the gift, salvation, when made right anew with God.

When religions offer salvation by compelling persons to follow and to obey their god, be it Allah or Yahweh, or another supernatural essence, the focus of the believer becomes self.  It is deeds, or works, achievements, check marks against the laws when met, that count. The follower essentially record in a book one’s good and evil actions. For that there is a concern. Comparing and striving to have the good far exceed the bad becomes the objective, a personal attempt to follow the laws and be obedient.  The goal becomes a priority over God. Even as the striving is to please God, it is the striving itself that substitutes for God. By its nature then a works oriented religion, as a means to gain access to the gates of the eternal city, to be saved, engenders humans to sin. Having no other God before them becomes instead having deeds to accomplish before them.

“And the weighing [of deeds] that Day will be the truth. So those whose scales are heavy – it is they who will be the successful” (Sura 7.8).

The extreme in the Islamic culture is Holy War, or jihad, striving to achieve an end that is a civilization that is just Muslim, the only god, Allah. But Muhammad made obedience to  the objective the focus, Allah’s name praised with each step. The Scripture of Islam, the Quran, became the book of laws, expanded by men interpreting Muhammad and adopting parameters they felt satisfied the Scripture (Shariah). It was the destruction of infidels and total obedience to his recorded messages, both from Allah and from his own mouth, that have been distilled and taught that if adhered to completely would make a person’s salvation possible, but never assured.

Those who measure their chances for eternal life by what they do can develop a sense of superiority.  ‘I have done more than you and am better than you.  Look at me, the good I do, the contributions I have made, the sacrifices.  How can God, how can Allah, not love me now.’ or ‘My religion, my faith, my ideology is better than yours.  If you do not believe as I do you are condemned to hades.  At my hands, blessed by Allah, I will eliminate those who challenge me and what I believe.  I will then be even more acceptable to Allah having defended Islam and the Prophet in a way that makes my entry into heaven as promised.’

But it should be humility one seeks not superiority.  Having knowledge of being saved makes it easier to live according to God’s wishes.

“Do nothing out of selfish ambition or vain conceit. Rather, in humility value others above yourselves” (Philippians 2:3).  “Clothe yourself with compassion, kindness, humility, gentleness, and patience” (Colossians 3:12b).

Religions with a supernatural leader assure us there is truth in life after death.  Eternal life with God, almighty and most powerful, merciful and beneficent, is to be sought and the ‘how to’ instructions are provided by the guide, or scripture for that belief system.  It does not make every such religion factual.  Such conditional requirements for salvation are helpful to living a moral and ethical life, to considering the poor, the widows, the sick, the in-firmed, and others.  But the price for salvation is being righteous.  And the Bible makes it clear that “There is no one righteous, not even one” (Romans 3:10). Therefore by doing good things, no matter how good, no measure of accomplishment can make a man right with God, or Allah or Person-supernatural.  Salvation is elusive. 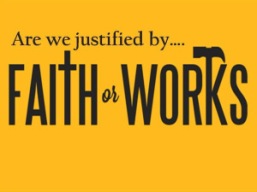 No man, no matter how hard he tries, can satisfy God’s requirements without God.  God knows those who try to earn their way into heaven will fail miserably as their eyes will not be on God, but on themselves and what they do. They will constantly be selfish and anxious, never quite sure if they are doing enough to get what they want.  God is never first in that case.

Only God can solve the problem.  He provides as righteousness that which He will credit to a believer.  Only God. Thus God provided Jesus. Man had to be punished for sins, past, present and future.

“For our sake He made Him to be sin who knew no sin, so that in Him we might become the righteousness of God” (2 Corinthians 5:21).

“He Himself bore our sins in His body on the tree (the Cross), that we might die to sin and live to righteousness.  By His wounds you have been healed” (1 Peter 2:24). You have been saved.

Those who believe they are united with Christ in his death and resurrection are saved, as they are justified by their faith; as what they know is true. It is God’s gift of perfect righteousness.  That is the only thing that enables a life eternal. Believe in Jesus Christ and you are Saved.  Saved, you keep the Law voluntarily because you love God and obey willingly. The Spirit of the Lord is in you as a reminder of every step you take. You may not be perfect, but by believing, God has made you perfect in His eyes.  You will feel as you have a new body, restored in Spirit, and resistant to Satan’s constant bombardment.  You will have a unique understanding, sensitivity and tolerance.  Christ will be the example living in you. You follow because you believe, and you have been saved.

“For if a law had been given that could give life (eternal), then righteousness would indeed be the law” (Galatians 3:21b).

No Other God, No Other Scripture

There is no other supernatural essence that does for man what God has provided and made known through the Bible.  A friend recently shared with me his acronym for B.I.B.L.E.  If is Basic Instructions Before Leaving Earth. (Thanks CF).  Take heed of the truth within.  Know that Christ lived, Christ died, and Christ was raised, witnessed by hundreds before ascending to heaven.  The Spirit of the Lord then descended to occupy those who believe as a guarantee of being saved.  What a gift!!!

“For by grace you have been saved through faith.  And this is not your own doing; it is the gift of God, not a result of works, so that no one may boast” (Ephesians 2:8-9).

Thanks Be To God.