We are Americans.  We love our Freedom.  Beware:  Muslims do not agree.  They may love our freedom now, but give them a chance and they will close the Judeo-Christian doors were have opened to all who want to enjoy what our Nation has to offer.

The attempts to kill a gathering in Texas because Muhammad was a target of the discussion, as well as Islam itself, is proof of the bizarre thinking and nature of those guided by the Quran and leaders in their schools (madrases) and worship centers (Mosques).  The purpose was to express our rights as Americans in an open forum, free speech in action.  The attempts to kill and maim innocents by two Muslim devotees was thwarted by the local police.  The perpetrators were themselves killed in an exchange of gunfire.  Before that happened a security guard, unarmed, was attacked.

At the gathering Geert Wilders spoke.  His comments can be heard directly (view video and contents).  Here are a few excerpts from his presentation:

“It is no coincidence that we are in Garland, Texas, tonight. It is here that, three months ago, shortly after the Charlie Hebdo massacre, Islamic activists convened to demand that free speech be curtailed. They want to prohibit cartoons, books and films which they find insulting.”

“I know from my own experience how dangerous it is to stand for this freedom. I know how dangerous it is to speak the truth about Islam.  I am on death lists of Al-Qaeda and the Pakistani Taliban and terrorists from ISIS because I tell people the truth about Islam. Islam has declared war on us, on our Judeo-Christian civilization. Islam wants to rob us of the freedoms and liberties. Islam and freedom are totally incompatible.”

“We are here in defiance of Islam.   We are here to defend our rights and stand for freedom of speech.  That is our duty.”

“As Ronald Reagan, your greatest president ever, said: ‘Freedom is never more than one generation away from extinction. We didn’t pass it to our children in the bloodstream. It must be fought for, protected, and handed on for them to do the same.’”

“It is not a clash of civilizations, but a clash between civilization and barbarism. Our Judeo-Christian culture is far superior to the Islamic one.”

“We have weak leaders. Appeasers are ruling The Netherlands, Europe and the USA. We have to turn the tide and we will. New leadership is what we need to defend our freedom of speech and resist the ongoing Islamization of the West.”

“Many of our Western leaders want us to shut up.   When we tell the truth about Islam, they call it Islamophobia.    When cartoonists make drawings of Muhammad, they are accused of provoking people.”

“In his address to the United Nations in 2012, President Obama said: ‘The future must not belong to those who slander the prophet of Islam.’  But we say: The future must not belong to Islam!  Do you hear, Mr Obama? We say: No to Islam!!  Unlike President Obama and his European colleagues, we are not willing to sign away our freedom and independence.” 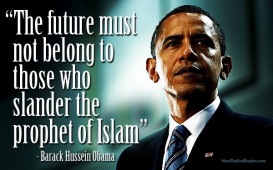 “The day we give away humor and freedom of speech is the day that we cease to exist as a free and independent people.”

“Moderation in the face of evil is evil. This is not what our age needs. We must uncap our pens; we must speak words of truth. We are facing a determined enemy who is striving through all means to destroy the West and snuff out our traditions of free thought, free speech, and our Judeo-Christian values. Make no mistake: if we fail, we will be enslaved. So the only option is to defend our freedom with all the energy we have. It’s time to be brave. It’s time to do our duty.”

“Let us de-islamize our societies!  No more Islam, no more mosques, no more Islamic schools. It is time for our own culture and heritage. Let us liberate ourselves from tyranny.”

“Article 18 of the Universal Declaration of Human Rights states that every person has the right to “change his religion or belief,” in Islam there is only a death penalty for leaving the faith.”

“Apostates (to Islam) are heroes and more than ever they deserve the support of freedom loving people all over the world.”

One thought on “Texas Free Speech Attack by Islam”