The battle going on between Palestine and Israel involves not just Palestine, but the Islamists, those referred to most often as terrorist organizations or affiliates that have in their charter the elimination of Israel and Jews. I am personally disappointed by the American Press and their lack of appreciation for the protection of Israeli people by its government and their foresight in erecting a defense system preventing thousands of potential causalities from the multitude of missiles indiscriminately fired at Israel. Condemned for the civilian casualties in Gaza, Israel deserves praise and Hamas severe criticism for its lack of security and safety for those it oversees. Israel is a responsible democratic Nation; Hamas is a tyrannical beast without regard for the damage it inflicts internally or externally.

Segment of Iron-Dome of Israel pictured . 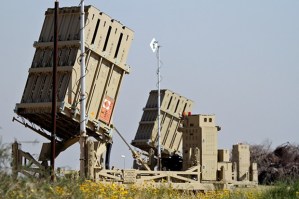 Prior to Hamas the Fatah Party was in power in Palestine. Arafat was its historical leader. (He died in 2004) When Hamas entered the scene their methods employed fear tactics and even killing of the opposition. An election (call it Democratic) in 2006 resulted in Hamas assuming authority over the people of Palestine; the opposition either eliminated or its supporters and campaigners sidelined by concerns for their own safety. It was hardly a Democratic election. And for one in power whose term was to be limited to several years, they remain, no additional elections that would potentially alter the leadership.

Hamas was founded in 1987 (during the First Intifada) as an offshoot of the Egyptian Muslim Brotherhood. The First Intifada was the 1987 battle between Israel and Palestine, a conflict with the PLO and other political factions when the pot of hatred towards Jews boiled over. Israel’s strength proved successful, but although diminished there were forces in Palestine that remained and would as weeds sprayed with Round-Up come back from an attempt at extinction. Hamas’ role increased.

As we have seen recently with ISIS Hamas’ objective was to establish an Islamic State in Palestine. Using acts of violence Hamas became the dominant and victorious Party. Such acts of violence are characteristic of the tactics of the Islamist organizations whose plans call for a world all for Allah with Sharia, as determined by men, the law of the land they occupy.

Attempts at reconciliation between the Fatah Party (Mahmoud Abbas) and Hamas (Khaled Meshaal) in 2011 have not seemed to be effective at curbing Hamas’ principal focus on death to Israel and as many Jews as possible. A saying often repeated as true, “If a man says he wants to kill you, then know he wants to kill you.” Be prepared and on guard.

The Islamic Terrorist organization with roots in Iran, the Muslim Brotherhood, Al Qaeda, and Taliban as a whole want to eliminate Israel. It is the only Democracy between Morocco and Pakistan in what is mostly the Middle-East. The militant political Islamists also place America high on their Destroy List because as a free Nation it does not honor the Sharia. Freedom corrupts its populace enabling them to go their own way (independence) and to think for themselves and live as they wish (in sin, possibly). This is not acceptable to Allah, thus the Islamic Police want to be Allah’s judge, jury and executioner.

Democracies, free people, are aware of the guile of the Islamists and their intent to kill infidels. The history of Islam is replete with killing those who are not considered Muslim or Muslin-enough, more so than any other form of political atrocity historically. The politically correct (PC) penchant of Democracies to their credit has been effective thus far at creating defensive barriers to protect their people. However being PC is an impediment to preventing the bit by bit invasion and imperialism of Islam. It appears evident the Islamists are less focused on defense and more focused on military offence. In turn they allow their people to die. In fact among their own, dissent riles the leadership which brings out the swords of defiance to eliminate the opposition. In the case of Hamas and Palestine more civilians die at the hands of other Palestinians (to include Hamas) than by Israelis. (read more – The Real Killers of Muslim Children in Gaza).

A cease-fire with Hamas will not stop them from continuing in their effort to eliminate Israel. It will not engender peace. One humorist commented that the term ‘cease-fire’ for Hamas means that Israel must ‘cease’ while Hamas ‘fires.’ Clifford May, President of the Foundation for Defense of Democracies, noted in a recent presentation in Aspen, CO, for Hamas a cease-fire to which they acquiesce is more a “policy of non-belligerence” and not peace. It provides time to re-group, and re-arm if allowed. Just as a cease-fire anywhere in the Muslim world where the Islamists present themselves will only temporarily curtail their efforts to dominate the world and impose Sharia.

The Holy War, Jihad, is not limited in scope and every Muslim in every corner of the world is a potential recruit. Certainly in areas of high concentrations of Muslims the recruiting tactic provides employment and rewards and for those who choose not to join, they are subject to the sword. The analogy of the ‘sword’ applies to all weapons of death used to extirpate the infidel, the non-compliant individual. Clifford May noted the ‘sword’ is the “key to Paradise – only open for holy warriors.” The ISIS take-over of much of western Iraq and killing the retreating military army of Iraq (a lack of adequate defense) and the methods they employ to grow the army of this declared Islamic State is an example of what to expect on-going. Jihad is obligatory on Muslims wherever they are.

Ibn Khaldun (1332-1406). A respected Muslim scholar and philosopher said, “In the Muslim community, the holy war is a religious duty, because of the universalism of the [Muslim] mission and [the obligation to] convert everybody to Islam either by persuasion or by force. Therefore, caliphate and royal authority are united [in Islam], so that the person in charge can devote the available strength to both of them [i.e. religion and politics] at the same time. The other religious groups did not have a universal mission, and the holy war was not a religious duty for them, save only for purposes of defense. … Islam is under obligation to gain power over other nations.”[i]

Solution to Islam-Creep and Jihad

The solution to the problem of Islam-creep is not popular. Where Islamists proclaim death to the infidel and the free for the sake of Allah, those under attack must act. If they do nothing, they will lose. They must do more than defend their borders. As to the solution – defeat of this mindset and overt actions on the part of Islamists supported by wealthy Arab and Persian nations using oil dollars (Iran, Qatar, Saudi Arabia, etc.) must become the objective. We cannot wait for their militant offense to reach a point where defeat of this incursion will cost the lives of unconscionable numbers.

Churchill warned the world many times (in the 30’s) of Hitler’s activities and motives. But his cries to do something went unheeded until the military forces of Hitler became so apparent in their objective that response was necessary. (read more). A warning for today – (Read article) – We must learn from history.

Churchill raised concerns also about Islam and Muslims,[ii] He proclaimed, “Individual Moslems may show splendid qualities, but the influence of the religion paralyzes the social development of those who follow it.  No stronger retrograde force exists in the world.  Far from being moribund, Mohammedanism is a militant and proselytizing faith.”  This warning applies today. “Appeasement makes us look weak, powerless and a waste of space…Hitler must be laughing!” Only today it is the Islamists that may be laughing. It must be heeded and Nations that oppose Islam, its leaders, must grow their defenses and their armies to fight the growth of Islamism. We cannot act to appease Muslims, the Islamists; it will not be effective. They believe they are superior and stronger and negotiations to mitigate their desires and be peaceful neighbors will only be seen as weakness.

Henry Kissinger suggested our leaders must never stop in their efforts at consensus building. We need today to develop and expand a united front towards the defeat of radical and political Islam.  One quote, “The security of Israel is a moral imperative for all free peoples.”   Another, “While we should never give up our principles, we must also realize that we cannot maintain our principles unless we survive.” (Read more quotes)

America, other free nations, must work together. We cannot wait and have a belated response in dealing with Islam. The beginning is now. But do the world’s free Nations political leaders have the backbone, the willingness, and the courage to do what is required? We are dealing with an ideology like communism or fascism, focused on the whole world and justified in their actions as a result of a claim they are ordained by God (their god – Allah). It is a façade. God would never permit or condone the actions of the Islamists. They are not ordained. They are brainwashed, demented and filled with the venom of their own hatred. The Paradise they suggest is but a killing field on fire; it is desolate with plumes of smoke rising. When the warriors of Islam arrive the virgins will be but hags with teeth diseased by their hatred, their hair grey from indecision and fear, and their bodies lacking the desire to satisfy.

Israel must be respected and their actions heralded for being actively and overtly concerned for the lives of civilians living under the cloak of enemy combatants, knowing however collateral damage in war is unavoidable. Give praise for their preparedness and their defensive structure. It is characteristic of a Nation governing for the common good, thoughtfully dealing with the safety and security of all who live within its borders, residents and visitors, Jew or Arab. It will do all they can to protect and defend their freedom.

[i] Wikipedia – Ibn Khaldun and Qur’an, Hadith and Scholars:Scholars on Jihad [ii] Quoting Churchill: “How dreadful are the curses which Mohammedanism lays on its votaries! Besides the fanatical frenzy, which is as dangerous in a man as hydrophobia in a dog, there is this fearful fatalistic apathy. The effects are apparent in many countries, improvident habits, slovenly systems of agriculture, sluggish methods of commerce and insecurity of property exist wherever the followers of the Prophet rule or live.  A degraded sensualism deprives this life of its grace and refinement, the next of its dignity and sanctity.  The fact that in Mohammedan law every woman must belong to some man as his absolute property, either as a child, a wife, or a concubine, must delay the final extinction of slavery until the faith of Islam has ceased to be a great power among men. Individual Moslems may show splendid qualities, but the influence of the religion paralyzes the social development of those who follow it.  No stronger retrograde force exists in the world.  Far from being moribund, Mohammedanism is a militant and proselytizing faith.  It has already spread throughout Central Africa, raising fearless warriors at every step, and were it not that Christianity is sheltered in the strong arms of science, the science against which it (Islam) has vainly struggled, the civilization of modern Europe might fall, as fell the civilization of ancient Rome.”