Consider the realms of power.  There are those whose leader is a Prime Minister reporting to a monarch and guided by a Parliament of elected officials. There are Presidents whose advisers are his cabinet selected by the elected President, with a Congress and Judicial system providing checks and balances on each branch.  There are autocrats that are self-styled leaders who achieve power by revolution and/or death and have no constraints on their authority. Such rulers have a protective military force due to an everyday fear for their lives from dissidents or others who wish to take the throne, or central command, as their own. None of those mentioned are kingdoms on earth, or acting for God.

Then there is the theocracy. Theocracy’s are present in todays mainly Muslim majority countries without a secular orientation. The Islamic theocracy respects and represents Allah. Decisions are made based on the scripture of the ideology and advice of scholars of their defined religion.  They in turn relate what their supernatural being commands.  For Islam that is Allah.  Many secular Muslim majority countries designate Islam as their nation’s religion. For the most ardent Islam is the only religion permitted that is protected by the government.

Can an ideal environment be named that is a theocratic Islamic State governed by the Quran/Koran and Sharia law?  It can be safely said that there is none. At least not one that is ideal. In fact those nations, like Iran and Saudi Arabia, Afghanistan when the Taliban was in charge, are  examples of wealthy or elitist rulers oppressing the poor. The governments are filled with uneducated religious zealots whose only texts are those of the ideology of Islam, used to rule and run the entirety of a Nation.  They are generally backward and trending in the opposite direction to modernity.  Progress is not an objective; it is only the religion of Islam, a daily devotion to Allah and the Messenger. Powerful man use their military to keep the weak contained, the strong at bay, and as personal protection. Complete loyalty to the monarch, supreme leader, or government officials, even clan or tribal headers, is essential.  Otherwise those considered less loyal, marginally loyal, suspected of being disloyal, even potentially so, are subject to removal, incarceration or beheading, in either case extirpated as not to be a threat.

That is the Kingdom of Allah.

Allah’s Kingdom is not as god’s Kingdom, the Biblical God.

On Earth As it is in Heaven

God’s kingdom is humane. It is color blind and balanced as to the sexes. It is compassionate. It is non-violent. Love fills the air. Neighbors are loved. It is tolerant. The health of everyone is a concern and people take care of others, their elders, the sick and in-firmed, the children and the needy. That is God’s plan. But there is no Nation today that operates as an example of God’s kingdom, whose laws are God’s laws.

But there are free nations that have enacted laws with consideration given to all people, common to all.  They are not theocratic. It is where freedom reigns.

God gave humans free will. You can say that God instilled in everyone an evil spirit, not so; it was a choice made. The enemy of God is Satan.  The evil spirit is that of Satan who invaded the innocence of the humans present in the garden of Eden. They had free will and chose to disobey God. We now live with that decision. We must use our free will to decide, fighting the stain within our bodily system that causes us to consider temptations, and all too often succumb.

In the Muslim world autocrats use shame as a tool to oppress its people as needed. They use Allah to deceive.  The Quran allows Muslims to act for Allah as needed to gain territory and seek to create a global caliphate, a universe All for Allah where only Sharia law, Islamic Law, or Allah’s Law applies.  Allah’s Law must be understood to include laws as proclaimed by the Messenger of Allah, Muhammad.  Such laws, upon reading and studying the tenets of Islam, trend towards the male, creating a male dominated society, culture too, where woman are useful for pleasure and for babies, male babies preferred.

If the Islamic examples available today are any indication a majority Muslim controlled area would be a miserable environment for most residents.  There the very wealthy, an elite cadre of Imams, mullahs, government officials and military commanders, controlling all the money, all the businesses, all the resources, and providing for the people they serve as they see fit, would be the beneficiaries, ruling on Allah’s behalf, yet enjoying the spoils of an addiction to the ideology of Islam from a pulpit, throne, or military command vehicle.

There should be no theocracy on our planet, neither a theocracy that requires its people follow Allah and the scholars of Allah, nor one that requires its people to follow the biblical God, the Prophets, the Apostles, Jesus Christ or the scholars of Christianity.  But the good of each can be sourced to establish a legal system, one that protects everyone regardless of who they follow, or do not follow.  What you follow, who you follow, is where free will applies.  That is your choice, and it is a choice that must be permitted, enabled and protected by common law.  Tolerance must abound allowing each to proselytize as one wishes sharing what they believe, their faith or lack of it, but not with a club in hand.  It cannot be a one way street decided by humans. God decides whether or not we chose correctly.  For us it is a guess. Although some feel, as I do, there is an answer.  That answer comes to us through faith, a relationship, and learning.  God’s word can be heard.

It is most difficult for me to believe there is no God.  Those who seek proof that there is no God are rightly challenged, if by nothing else than the world in which we live, the life of a newborn, and advances made by humans given their intellect and abilities, considering fully how such skills were imparted.

There may be a correct path that leads to a Kingdom not of this world. There are alternatives out there for people to follow.  Islam is one.  Christianity is one.  But there is Judaism, Mormonism, Hindu and Buddhist, the Bahiaists, atheists, even those who seek only for all people to be caring and tolerant, whether a supernatural being exists or does not.  What you believe you can share, but you must not insist or require another to follow, especially with death as punishment if you choose an alternative, such as the case for a Muslim. The beauty of a tolerant world, the ability to share, is the use of a wonderful gift provided by our Creator (if you accept creation), a gift only imparted to humans, that of a discerning mind.  However that mind, that incredibly receptive brain, must be allowed to learn, to analyze, study, determine, question, debate, discuss, and decide, from a wealth of resources available, that path for them.   Restraints on what we, as humans, can learn or know are useful only for the tyrant, the bully, the elitist seeking control to satisfy their wants, their narrative and their desires.

Lift the shackles on a person’s abilities, the restraints on learning, encourage mankind to revere history, to not repeat the errors of the past, to control emotions, to contain our evil selfish natures, to be objective and open-minded, and mostly to love our neighbor, embrace equality of the sexes as to opportunity, and make tolerance a goal.  In that way every human will have an equal chance to find out who they are, their place, and their purpose. 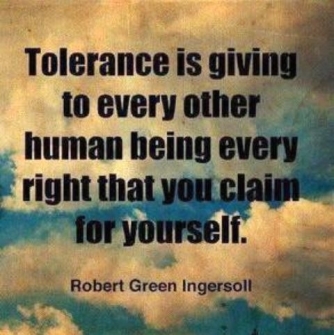 Is a Kingdom on earth possible?  I believe so, but only if everyone in the world fights for freedom, as well as tolerance and seeks peace.  Selfish wants must be controlled.  The addiction of selfishness must be addressed.